MASARYK AND THE SERBS: POLITICAL IDEAS

Political ideas of Tomáš Garrigue Masaryk and of the leading contemporary Serbian intellectuals and statesman, such are Jovan Cvijić, Jovan Skerlić, Stojan Novaković, Milovan Milovanović and others, were very close and similar at some specific points. . . .

In Serbia, the Great War (1914–1918) and the Salonica Front are typically associated with a powerful image in collective memory. Therefore, it is very important to examine the veracity and origin of mental images, which may be formed under the influence . . .

THE IDEA OF FREEDOM IN SLOBODAN JOVANOVIC'S LEGAL AND POLITICAL WORKS

Differentiating the ideal from the typical state, Slobodan Jovanovic talks about the emergence of the state, its elements and tasks, the relationship between state and law, state federations and federal state. While defending economic freedom and the principle . . .

For the Serbs in the Habsburg Monarchy, Jaša Tomić was one of the most significant political representatives in the end of the 19th and the beginning of the 20th century. His political concepts, ideas and activities were of the essential significance to . . .

PANDEMICS AND INSTITUTIONAL CHALLENGES IN THE CONTEMPORARY SOCIETY

The analysis of social and political consequences of coronavirus COVID-19 pandemics brought with it a huge number of challenges. Certainly, one of the largest one is the fact that this field is mainly studied from medical and economic perspective, while political . . .

THE PROSPECTS FOR INSTITUTIONAL REFORMS OF THE EUROPEAN UNION: A LIBERAL INTERGOVERNMENTALIST PERSPECTIVE

The purpose of the article is to determine the probability of institutional reforms resulting from the debate on EU future held as a part of the “Conference on the Future of Europe” initiated in 2020. In the theoretical dimension, the analysis is based . . .

Civil war is an armed conflict between political, national and other antagonistic social groups in one state for purpose of achievement of political and economic interests. Civil wars rarely end up with compromise and they are made as long as one side wins . . .

Since the year 2000, two large political blocs have been dominating the Croatian party system: the conservative one, rallying around the Croatian Democratic Union (HDZ), and the left-liberal, gathered around the Social Democratic Party. The dynamics of competition . . .

In this article the author reflects on Badiou’s concept of democracy, at the same time considering philosophical, social and political implications that come forth from this contemporary complex theory. Badiou’s writings on democracy appear as a constitutive . . .

Serbia and Hungary have traditionally good regional cooperation and stable bilateral relations and in that context the protection of national minorities, respect for minority rights and the preservation of ethno-cultural identity takes a special place. Bilateral . . .

REPORTING ON SECESSION IN SERBIAN MEDIA: THE CASES OF SCOTLAND AND CATALONIA

This research relies on instrumentalist explanatory theories of secession and the media framing theory in order to examine discursive praxis through which Serbian journalists report on independence referendums being held in West Europe, with primary focus . . .

THE NEW CLASS STRUGGLES IN FRANCE: THE CASE OF “YELLOW VESTS”

On November 17, 2018, one of the most successful social movements in the country’s recent history, the “Yellow Vests”, was born in France. What particularly sets it apart from any other similar movements is violence. It’s “Yellow Vests” violence . . .

MODELS OF DAILY NEWSPAPERS IN THE 21ST CENTURY THE CRISIS OF THE PRESS AND STRATEGIES FOR SURVIVAL: THE CASE OF SERBIA

This article represents a sublimation of the findings and the conclusions drawn by the same author (Slobodan Penezić), that came during the preparation of a doctoral thesis, defended at the Faculty of Political Sciences (University of Belgrade) in October . . .

Throughout history, the primary threat to the security of a state came from the military potential of opposing states or military coalitions. The last decades have brought us changed circumstances, in which an increasing threat to national security has been . . .

In the text of the paper, legal nihilism is understood as a selective, arbitrary and informal political-command implementation of law that results in its abuse. Political actors, judicial officials and citizens are detected as legal nihilists and all of them . . .

In this article the author before all points out the main characteristics of judicial independence as a principle of key importance for realization of the rule of law, especially insisting at theoretical differentiation between de iure and de facto independence. . . .

CONTINUOUS CRIMINAL INTERVENTIONISM ‒ AT THE BACKGROUND OF POLICY AND LAW

Although criminal law, as a system of legal norms, must constantly adapt to the conditions of contemporary crime, in the context of rapid and dynamic development of society and social relations, it should be a solid and relatively conservative system of regulations. . . .

Although the international community defines corruption as the biggest security threat today because it links organized crime, money laundering, terrorism and other security threats, the fight against its actors, especially in cases of high political office, . . .

PROHIBITION OF CORPORAL PUNISHMENT OF CHILDREN IN SERBIA 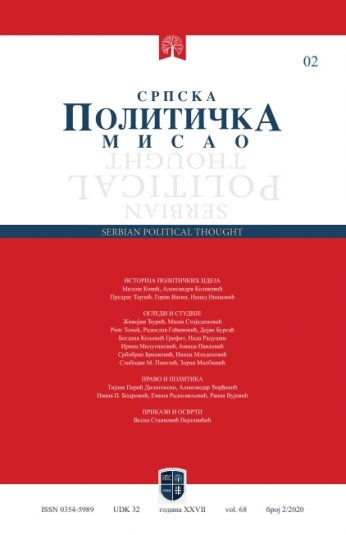