“FAULT LINES”: GENERATOR OF INSTABILITY OF THE POSTYUGOSLAV BALKANS

The Balkans is a specific European region primarily because of its ethno-civilizational heterogeneity and geopolitical importance. In this context, it is often considered a “subcontinent” whose differentia specifica is instability and conflict. Both the . . .

This paper compares and critically examines the most important features of structuralism and post-structuralism as two extremely important theoretical orientations for understanding current social and political reality in genere. In this regard, the following . . .

This paper represents a critical analysis of the position of the citizen in the contemporary democratic society. There is also a necessity for the analysis of the process of weakening social and political engagement of citizens. The main goal of this paper . . .

Although they differ in approach, it is fundamental that both Marx and Nietzsche simply want to encourage and empower humanity to stand up and fight for themselves and the world around them. The aim of the paper is to show that Marx and Nietzsche, thinkers . . .

I look into assurance games in large groups (more than two players). After discussing a typical two-player example, I show the differences between the game in smaller and larger groups by focusing on the assurance that all the members of the collective will . . .

TOWARDS A CONCEPTUALISATION OF RESILIENCE IN SECURITY STUDIES

Resilience has become a catchword in academic and professional discourse due to, implicit or explicit, acceptance of traditional approaches to prevention and preparation. Derived from the Latin verb “resilire” – to jump back, currently mainly signifies . . .

“FAKE NEWS” OR DISINFORMATION: (SELF)REGULATORY FRAMEWORK AND CHALLENGES IN PRACTICE

“Fake news”, or disinformation, as a phenomenon and as a term is being overused lately. In parallel, there is no consensus what does this term mean neither in media theory nor in media law. In the meantime, “fake news”, especially online spread disinformation, . . .

The subject of this paper is twofold – it consists of the analysis of general characteristics of genocidal intent, as the essential feature of the crime of genocide and the assessment of its major elements from the aspect of the theory of international law . . .

Article 41 of the ECHR authorizes the Court to afford the applicant just satisfaction, with the aim to put him in the same legal position that he would have been in if his rights protected by the Convention had not been breached. Several forms of just satisfaction . . .

Violent property crime are acts in which the social danger is very high, and therefore imply an adequate social response. The aim of this research was to examine the criminal policy and effectiveness of the courts in conducting criminal proceedings against . . .

ANALYSIS OF COMMUNICATION SATISFACTION AND ORGANIZATIONAL EMPLOYMENT OF EMPLOYEES

The focus of the authorʼs research is to verify the existing link between communication satisfaction and organizational commitment of employees. The motive of this research, as we could see, was the desire to determine whether there was a justification for . . .

HOUSING POLICY AND MONITORING OF GENTRIFICATION – LESSONS FROM SWEDEN

This article analyses the manner of creating and implementation of housing policy and solving problem of social exclusion and segregation in Swedish cities. Sweden, in time of welfare state, had one of the most democratic concepts of affordable housing, but . . .

THE ROMAN CATHOLIC CHURCH IN CHINA – BETWEEN CHALLENGES AND OPPORTUNITIES

The Rise of Authoritarianism in the Western Balkans 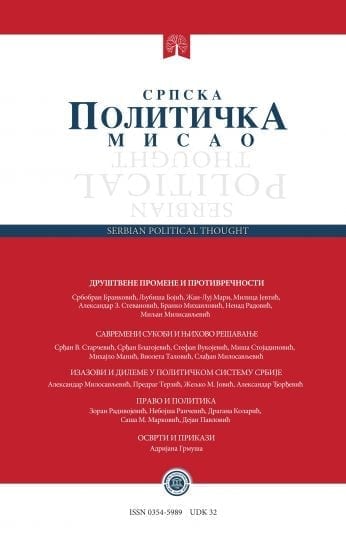